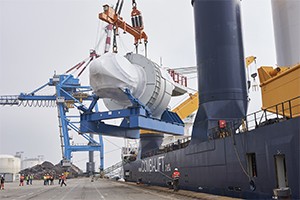 The entire project (including other components of the turbine) was directed by OCTRA, a French engineering and transport board, recently based in Montoir and headquartered in Paris.

This was the first lo-lo handling operation to be conducted for this type of nacelle.

The previous nacelles were loaded by ro-ro operation at the Saint Nazaire dock basins. The 422-tonne nacelle was conveyed by specialist haulage firm Transports Scales on 18th March from the factory to the TGO terminal, where it was stored pending loading.